Every year at ACP Entertainment, we introduce multiple new and exciting attractions, this year is no exception! In 2023 we are thrilled to introduce over 20 new attractions (with more on the way) and activities and we are also celebrating 15 years of amazing entertainment.

Let’s talk about our rides to start our ‘New for 2023’ list! Lost Treasures is a play port/funhouse for the little ones and was introduced late last year-it’s a smash hit at every event! We also have a brand new swing ride called Cyclone which is a 20 seat chain/chair swing ride. Cyclone will now be our largest capacity swing attraction. Additionally we’re excited to introduce a brand new Classic Train from Wattman Trains, the Rolls Royce of Trackless Train Rides. This train is absolutely gorgeous with moving train wheels, smoke, sound effects and even a 4th car for maximum capacity.

We have quite a few new inflatables for 2023 as well, first up is the Rainforest KidZone and Barnyard KidZone. These two inflatables have a similar layout but a completely different theme with beautiful and vibrant graphics that will definitely wow your crowd. We also have a new game similar to Krazy Kones and Speed of Light that is called Zap a Mole. This time instead of using your hands, players will use a giant foam hammer like the classic “Whac-a-Mole” arcade game. Three new obstacle courses will hit our line up this year; High Voltage, Radical 30’ and Radical 40’ Obstacle Courses. We also added, by popular demand, a second dual lane slide called the Wacky Double 18’ Slide. Finally the Big Top Games inflatable, which has 4 games in one, and the Grand Carnival which is an inflatable carnival booth tent.

Two new digital games were added to our lineup in 2023, Four in a Row and Chaos! The digital Four in a Row game is an arcade version of Connect 4 and will have your guests engaged all night long! Chaos! is a game similar to Strike a Light but allows for 4 players instead of 2. Players will also have to cross over into other players area to tag lights of their color too. To say it’s chaotic is an understatement! 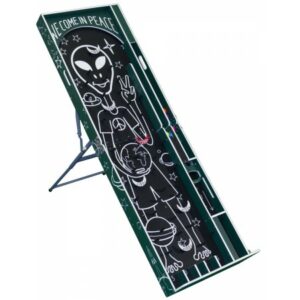 We’re extremely excited to introduce an entire new lineup of Midway Carnival Game trailers in 2023. Jungle Chase is a roller derby game, similar to skee ball, that has a jungle theme with racing monkey characters that up to 14 players can play at a time. The Water Race has racing dolphins that move according to how long the players can hit the moving bullseye targets. The Water Race game can also accommodate up to 14 players. Both of these game trailers will come standard with plush prizes in which one prize will be given away every 4-5 minutes. We also introduced a few new regular individual carnival games which includes Alien Pinball, Ricochet, Leaping Lizards and the Kiddie Hi Striker.

Last but definitely not least, we are introducing an entirely new attraction that we introduced in late 2022; Synthetic Ice Skating Experience. The 36’x40’ ice skating rink includes the synthetic ice, rental skates, carpets, chairs, fencing and lighting to your event space. No freeze time needed!

Wow, that’s quite the lineup for this year! We’re thrilled to be able to bring you these incredible new attractions and activities and we hope you are able to incorporate some of them if not all of them into your upcoming event(s). If you have questions about any of the new attractions for 2023, please don’t hesitate to give our team a call at 616-826-8220.